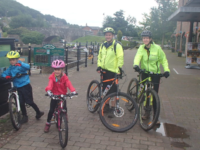 Has 6 Months Training Been Enough to Tackle The Taff Trail?

Lara Ebrey, aged just 5 years old, set herself a challenge. Could a 5-year-old girl cycle the Taff Trail, a distance of 55 miles over the gruelling Welsh terrain, in just 1 day?

Following in the footsteps of her brother Lewis, who last year cycled mount Snowdon aged just 6, this year Lara picked up the gauntlet. The challenge – to cover 55 miles in a single day, aged just 5 years old. We dubbed the challenge #55@5

The trail selected was the Taff Trail, which begins in Brecon in Mid Wales, and runs through the lower Brecon Beacons, past Merthyr Tydfil and eventually finishes by the sea in Cardiff Bay. 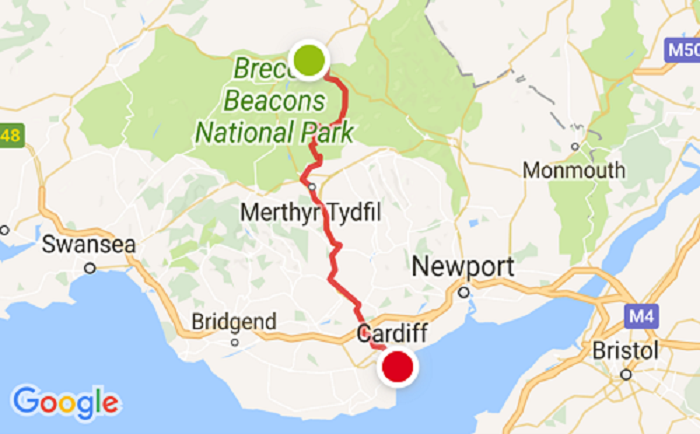 Our training for the event took over 6 months, and covered many miles on trails local to her home in High Wycombe, although none so challenging as the Taff Trail. You can read the previous instalments here.

From a tentative start on the Pheonix trail at Princess Risbourough,  covering just 7 miles, the distances and speed grew. Before we knew it, Lara was riding 25 miles with relative ease. But all of these miles were flat, and some bad planning meant the end of the training regime was missed. By the time the big day arrived, the biggest distance covered by Lara was still only 33 miles of flat riding, barely half the distance of the challenge.

On the day of the challenge, we left base camp in Cardiff at 7am, and travelled north to the start point in Brecon. The drive took an hour, and the reality of just how far this ride was hit. Dad was not expecting her to complete the ride.

We left Brecon at 8.30am, and started the ride to our first check point, where we would meet our support team to restock on water and food. The first 8 miles were a straight forward ride, following the canal to start, and then some easy single track roads until we reached the first reservoir at Talybont-on-Usk. From here we had a long 5-mile climb ahead. This is a climb that would challenge even the most accomplished of riders, but Lara took it in her stride – even her brother Lewis commented: “That girl is a machine!”. We reached the top of the climb and checkpoint 1 at 13 miles, and above all, on schedule.

Leaving the reservoir, we knew that the toughest part of the ride was done. At least the toughest up hill section. It’s all downhill from here.

Then we were hit with climb after climb. Much shorter than the previous, but these just weren’t obvious on the gps traces Dad had examined prior. Wales had hills. Who could’ve known…… 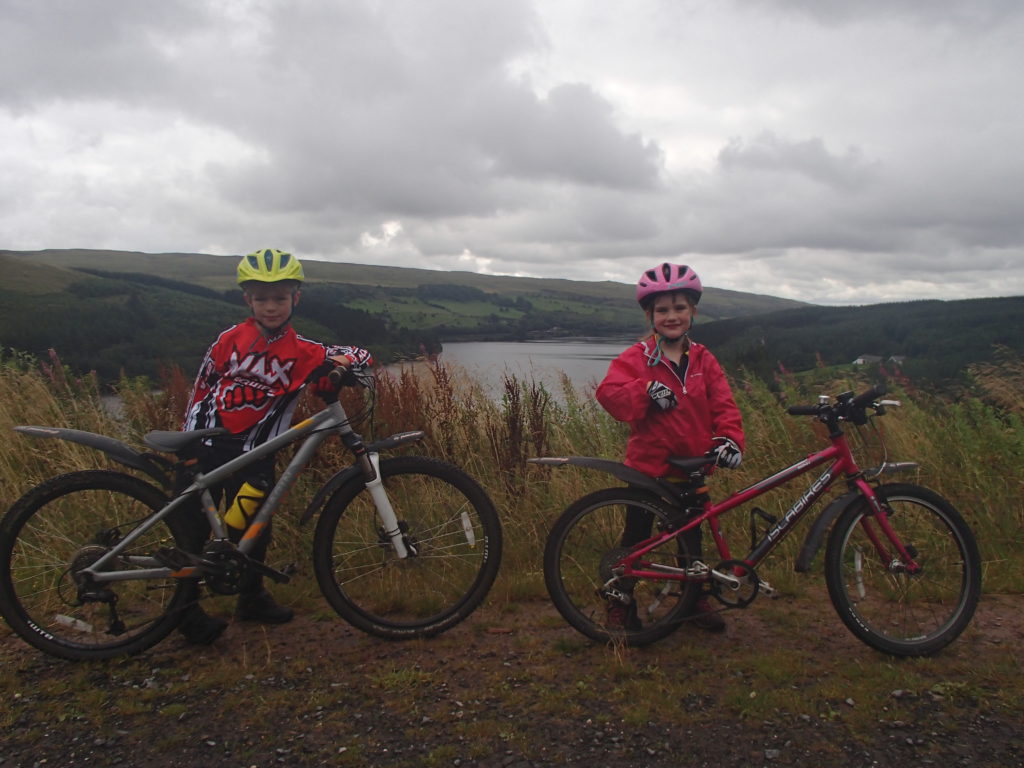 The hills slowed us down, and we hit our second stop at Merthyr Tydfil about 30 minutes later than planned. No huge issue, but then lunch took more than the 30 minutes we had allowed too. By the time we were riding again it was 2pm, and we were an hour behind schedule.

From Merthyr, the ride was fairly easy going. Mostly comparable to the flat trails we practiced on. Still a few uphill sections, and a few sections of road which are always tough to manage with little ones. 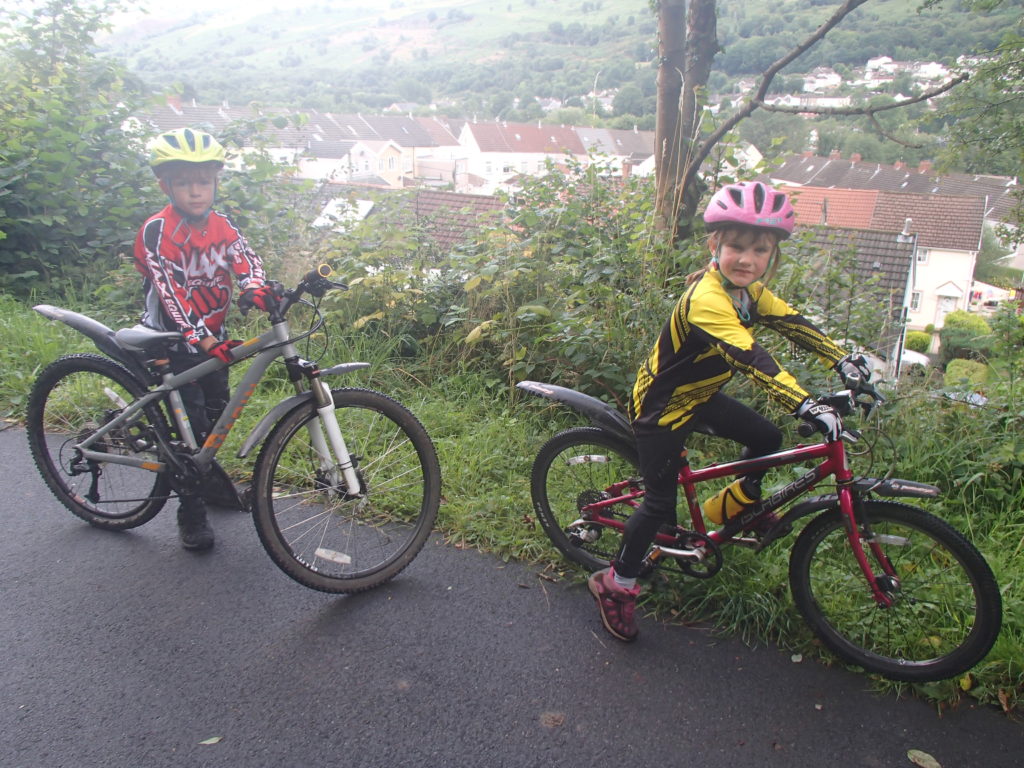 The next checkpoint was at Abercynon, approximately 35 miles in. Lara, now refuelled, did a good job of hitting our 10mph target, and as a result, this section was completed quicker than we thought. Our support team for the day (Gran and Grandad) met us for the third time to resupply water, snacks and TLC. By this point, we had around 20 miles remaining, and although time was ticking on, it was starting to look achievable. 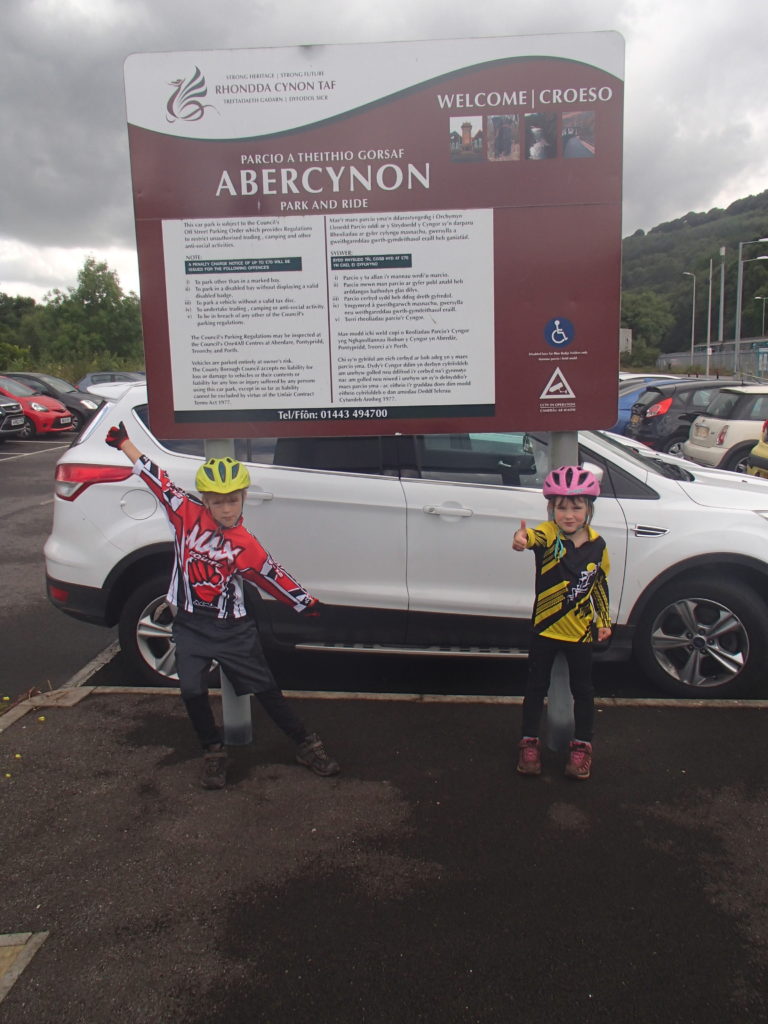 The First Crash Kicks In On The Taff Trail

However, the next stint did not go according to plan. A few miles in, and Lara was fading. She had been on the go since 7am, and riding since 8.30am with few breaks. Unsurprisingly, she had her first crash of the day. She had got used to the tarmac path around Merthyr, so soon after we entered an off road section through the woods, a rock leapt out in front of her, and the results were inevitable.

This was the first real sign that she was starting to struggle, but more was to come.

The pace dropped substantially, to the point we discussed whether to stop. We made it to the fourth and final support stop at Tongwynlais with the help of a very nice lady from the charity Pedal Power. A very kind lady who we met en-route, acted as our guide through the on road section and once we had a rest, and after some discussion decided to push on. 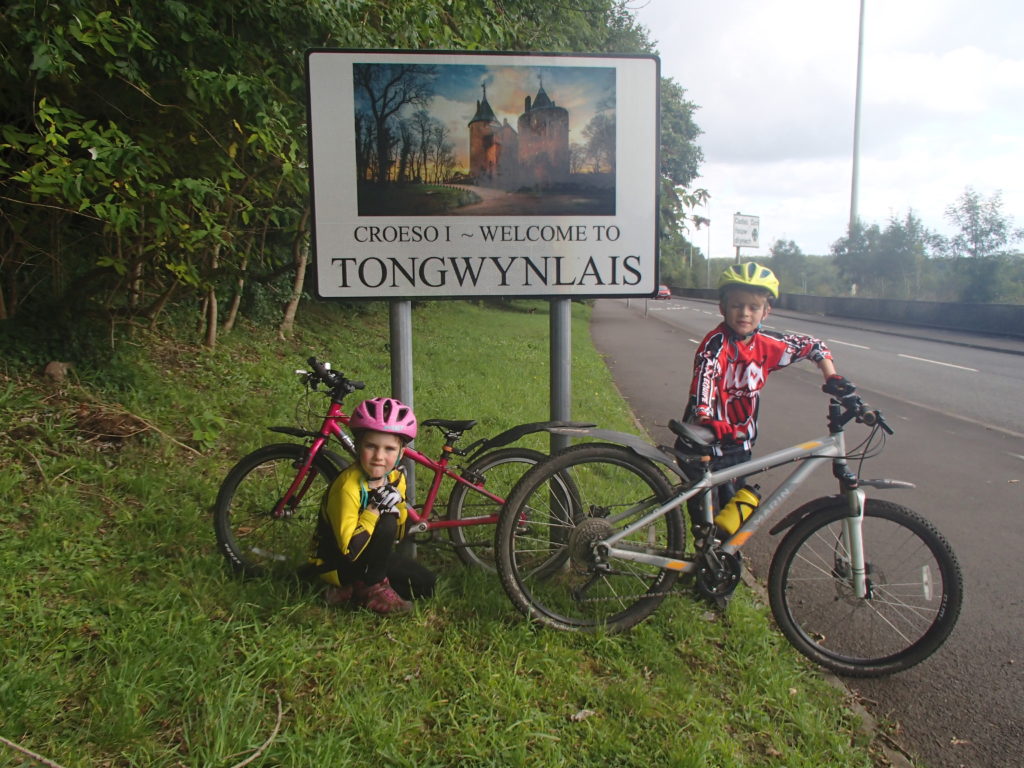 The mileage was now into the 40s. Not only had she never done this distance, but the terrain so far has been way tougher than we had trained on. Lara was tired, and we were into unknown territory. Everything from now on was down to her.

Not long after leaving our support crew, again, Lara was struggling. We stopped for another rest and refuel, only to get going and straight into another crash. Again, we consider calling an end, but having made it so far, Lara wants to continue. 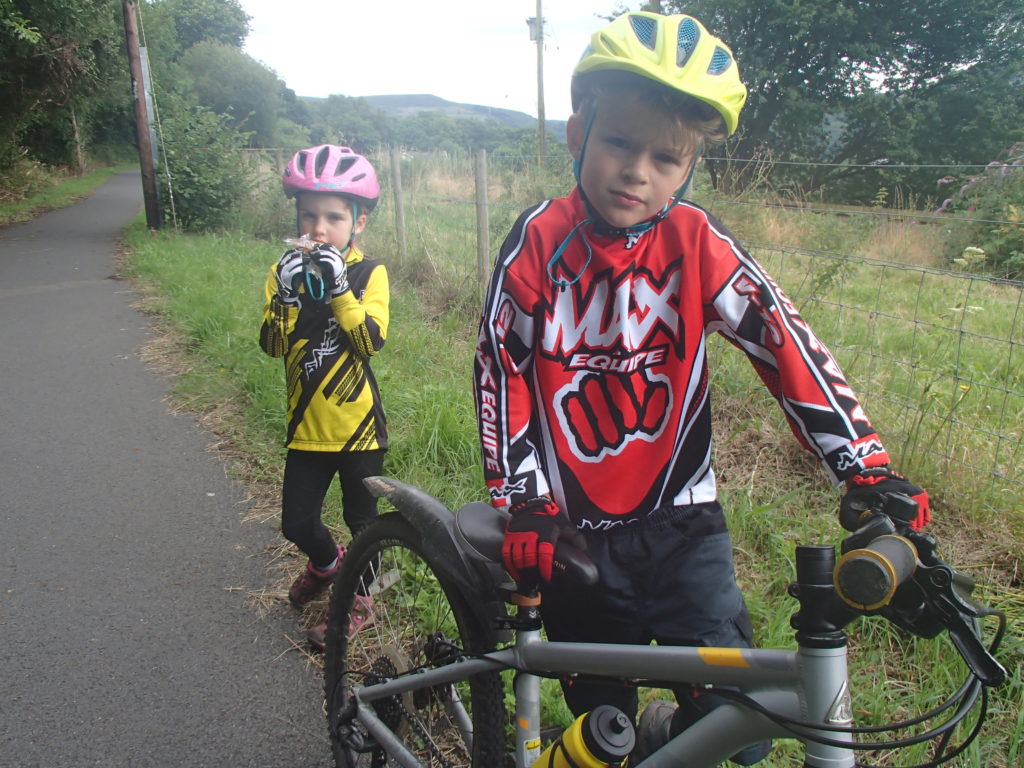 We knew the final section of the route into Cardiff passed our camp site. This was going to be tough. Lara at this point decided that the camp site would be her finish point, which would put her about 5 miles short of the 55-mile target. Still a very respectable achievement, and given her fatigue levels were getting almost unmanageable it seemed sensible.

Then the inevitable happened. Another crash. Lara tried to cycle through a gap that simply wasn’t there, and hit a metal bar. This, we were certain, was the end of the challenge. There was no reason for this crash, other than fatigue. Lara was not hurt, but she was very upset, and Mum and Dad were out of ideas.

Pushing Through The Limits With Brotherly Encouragement

At this point, Lewis stepped in. He has never forgotten an assembly given by his teacher in school last year. The subject was resilience, and he knew from his Snowdon ride that he had to dig deep when the going got tough. He had a chat and a cuddle, and really took Lara under his wing. Before we knew it, we were going again, the two of them riding ahead together. They passed the campsite without noticing, and amazingly we were back on track. 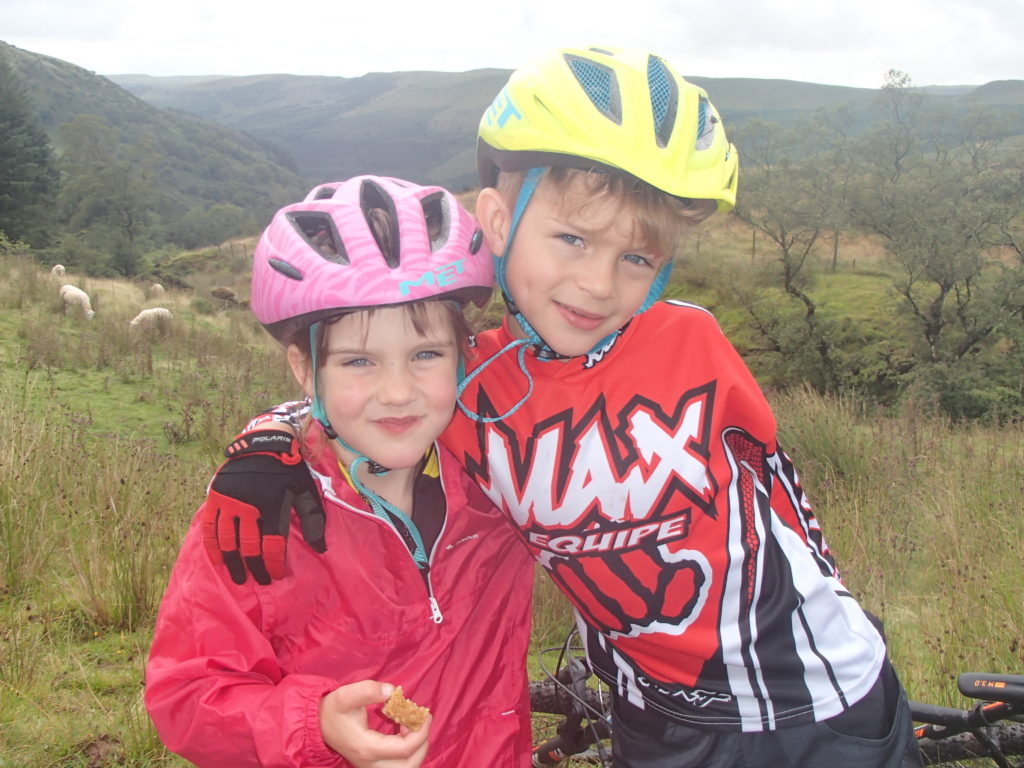 The final miles into Cardiff Bay were still tough, but suddenly there were less than 5 miles to go. Lara knew that the finishing point for the Taff Trail was by the big wheel. Mum and dad could see it in the distance, but Lara couldn’t – being short is a real disadvantage sometimes! We kept going, and soon enough, we were riding along the front of Cardiff Bay. At the wheel, our final destination, Gran & Grandad once again met us. We made it. Lara had done it. 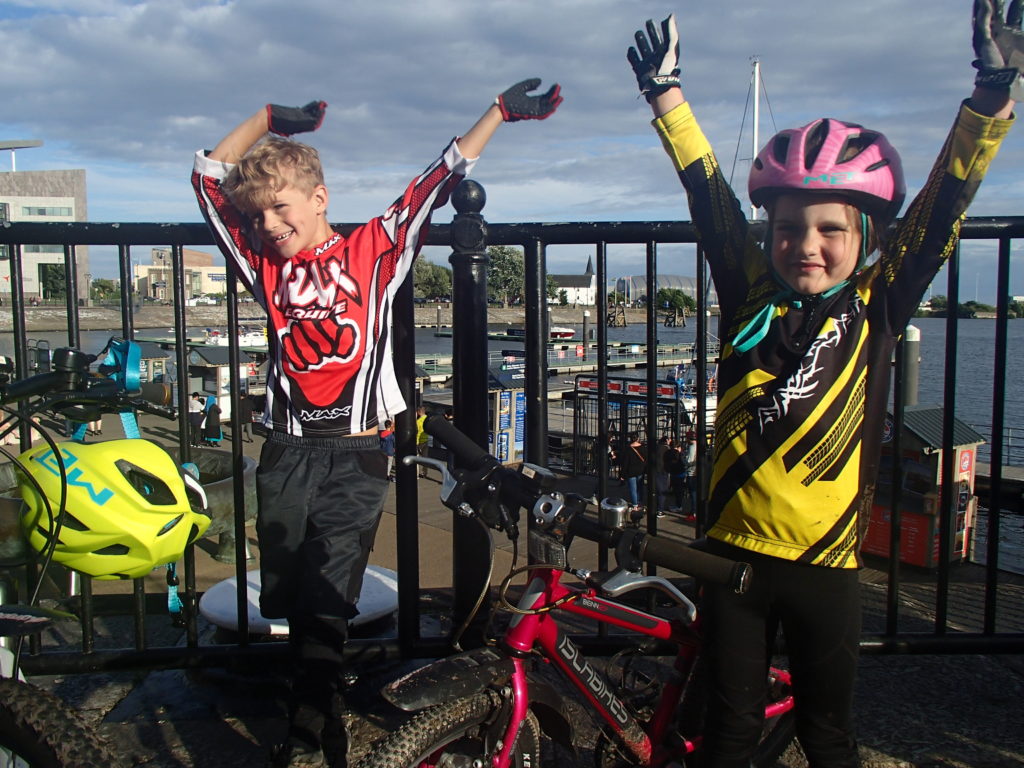 This was a huge physical and mental challenge for a 5-year-old (and even for her 7-year-old brother who accompanied her throughout the ride). The achievement is something that will be with them for the rest of their lives. However, more importantly, the lessons they have learned along their journey will also be with them, and they’ll never forget – When the going gets tough, the tough get riding… 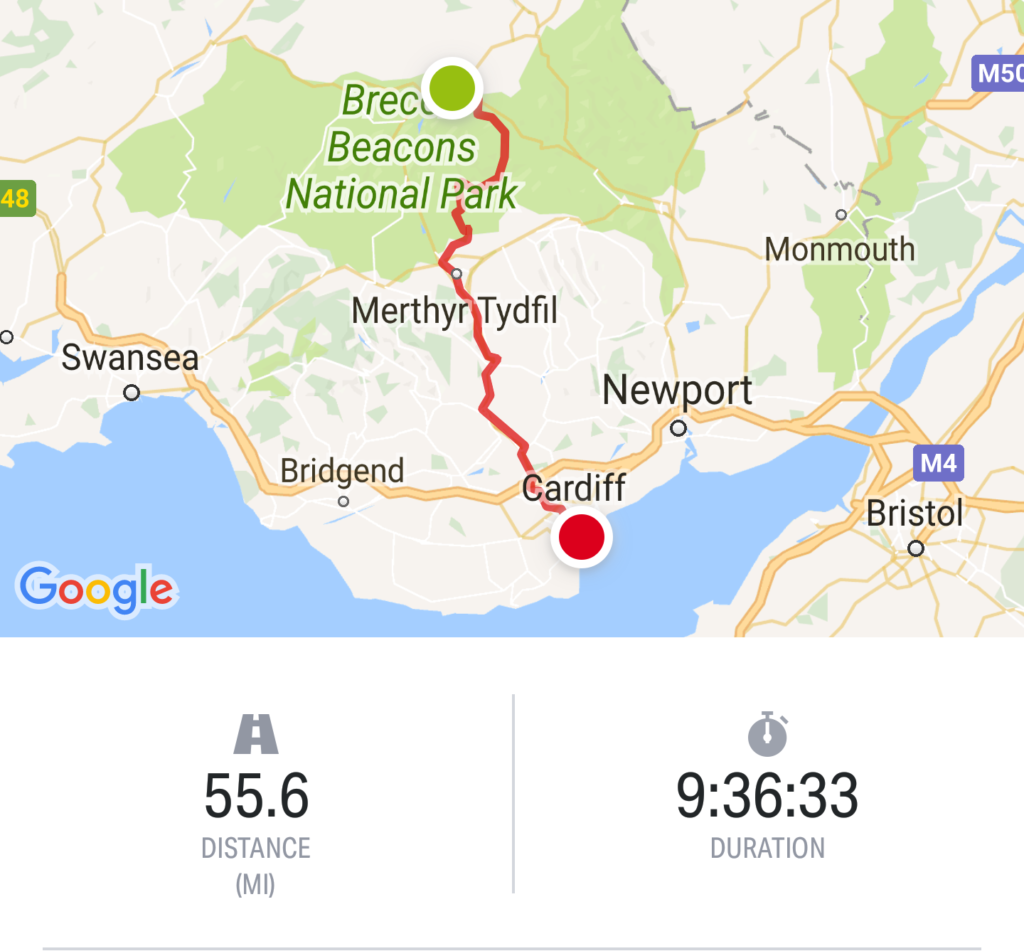 After such a huge challenge for both Lewis and Lara, our thoughts are turning to next year. However, at the minute even the mention of going out on the bikes sends them fleeing..