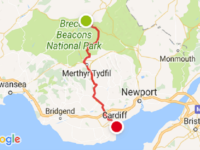 The Taff Trail Epilogue – So. She did it!

After months of training, and a day of total dedication and determination, Lara Ebrey cycled the 55 miles of the Taff Trail in one day. Her achievement has been shared far and wide across the internet, and she is very, very pleased with herself, as is her brother Lewis.

However, this update is not about Lara herself, but about how the challenge came really came about, and the massive amount of preparation that went into it. For an experienced adult, the Taff Trail would simply be another day in the office, but when you are 5, there’s a lot more thought goes in – and it’s mostly from the grown-ups! 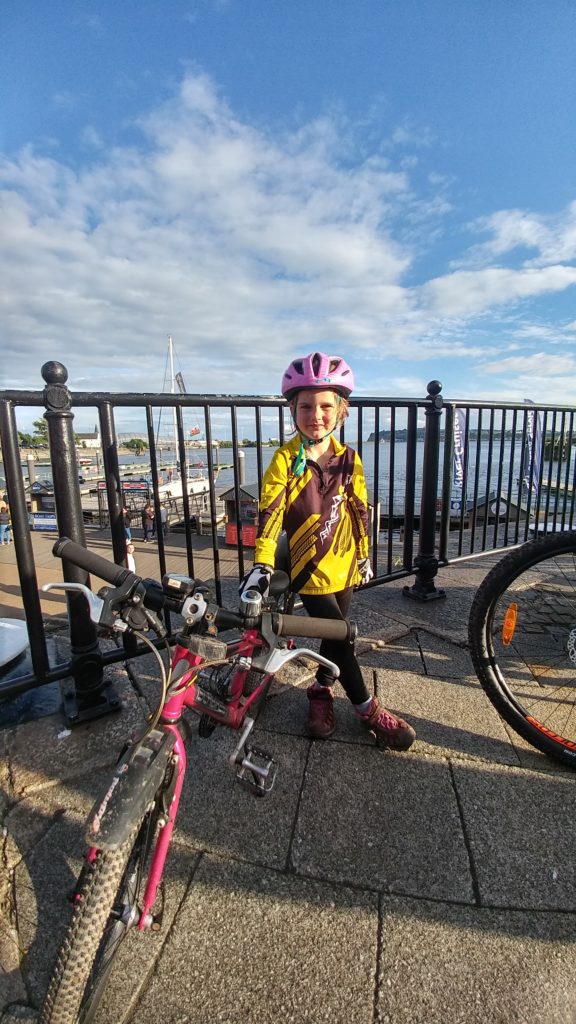 Was this Lara’s idea? Or was it Mum and Dad finding new ways to tire her out before bedtime?

Last year, Lara’s brother Lewis cycled Snowdon. Lara really wanted to come along. She is and was technically competent enough, but the rocks and drops on Snowdon are bigger than her bike would ride. She felt a little left out, and when we talked about a challenge for this year, both Lara and Lewis asked for a distance challenge.

We looked at many trails, both shorter and longer than the Taff Trail, and many options – 1 day, 2 days, a week. We finally settled on the Taff Trail for many reasons – distance, profile, mostly off road and achievable in a day. It fitted all of our favoured criteria. The option of a multi-day challenge (such as the Tarka Trail in Devon) would come with the requirement to carry on the next day, and that can be tough – especially when the legs are tired from the previous day.

Mum & Dad put the idea of the Taff Trail to both kids, and they both agreed they were on board. Admittedly, 55@5 had a nice ring to it. So although the trail research was done by Mum & Dad, the final say was down to the kids. And let’s be honest – if you knew Lara, you’d know very well that if Lara didn’t want to do this challenge, she wouldn’t. In that respect, she is like every other 5 year old in the world. Yes – you could cajole and bribe a few miles out of her if she wasn’t up for it. But 55 miles? This takes commitment, not persuasion.

We spent days, weeks and months planning this trip (as we did Snowdon last year). We treated the challenge like a mini-expedition – including the kids where it was important and leaving the less interesting stuff to the grown-ups. Every detail we could think of was looked at. Every point on the route mapped. Every meeting point visited prior to the day.

We watched youtube videos of the entire route several times, checking out the terrain and the pathways (yes – we need to get out more), in addition to speaking with everyone we could find who had ridden the trail before to get first-hand knowledge. Then we had planned to go and ride sections of the trail prior to the day, but time, school and life caught up with us.

We also considered medical needs – what if one of us had a fall. How easy would it be to get help? (On the day we carried radios as well as phones – just in case). Where were the exit points if we needed to call off the ride? How far would we be from any of these points?

So everything was planned, from the support crew of Gran and Grandad (We are not at Team Sky levels just yet), down to the finite detail of certain features on the trail. Even wind strength and direction played a big part in our choice of day to attempt the trail. 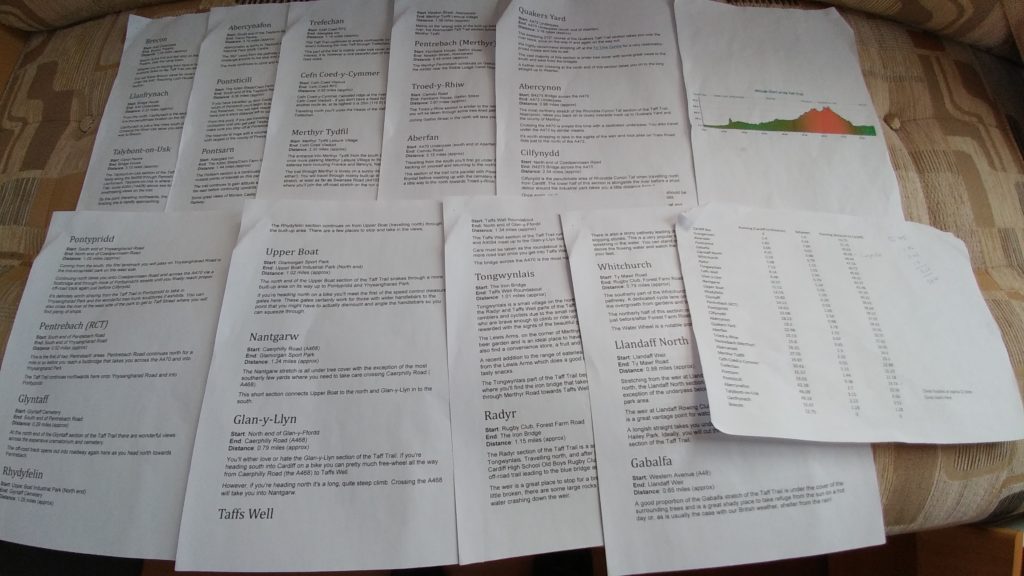 Training …but a five-year-old shouldn’t be allowed to train.

This is very true, and although we use the term loosely, our recommendation would be “Don’t try this at home!”. That may sound somewhat bullish, but Dad has first-hand experience of training at a very high level, and has a clear understanding of the do’s and don’ts of working with undeveloped muscles. Without going into finite detail, the “training plan” was mastered with careful attention to both the kids and the final challenge. The extension of the rides (in terms of distance) was gradual in real terms (if impressive in child terms!). Every ride was on flat ground, with a big break between big rides. All with the intention of limiting muscle development –big muscles in undeveloped kids can cause all kinds of problems. Efficient muscles, within reason, are a good thing.

We did no work whatsoever on cardiovascular development, as the speeds were low in comparison to thresholds, and the kids were more than fit enough in this department from their other activities.

During the ride, we carried medical kits, had regular meeting points and monitored both Lara and Lewis’s condition. The latter took everything in his stride (and would probably have given the return trip a crack if we suggested it!). Lara did find going tough on the day – it wouldn’t be a challenge if not. However, at no time was she near a state of exhaustion. Tired – yes, fatigued – yes, a little, but apart from concentration, her body was fine. To that end, once we returned to the campsite after finishing the challenge, she went straight out to play in their “den”. She did sleep well that night though!

The planning didn’t finish there though. We knew that muscles would be sore after the day, and we knew that she would need to keep things moving. For an adult, you would maybe plan a little ride, book a massage and then go for a cold beer. For the kids, we went to a campsite with a swimming pool. This allowed them to keep moving, whilst in water. Not perfect, but it worked. We had very few complaints about aching legs. 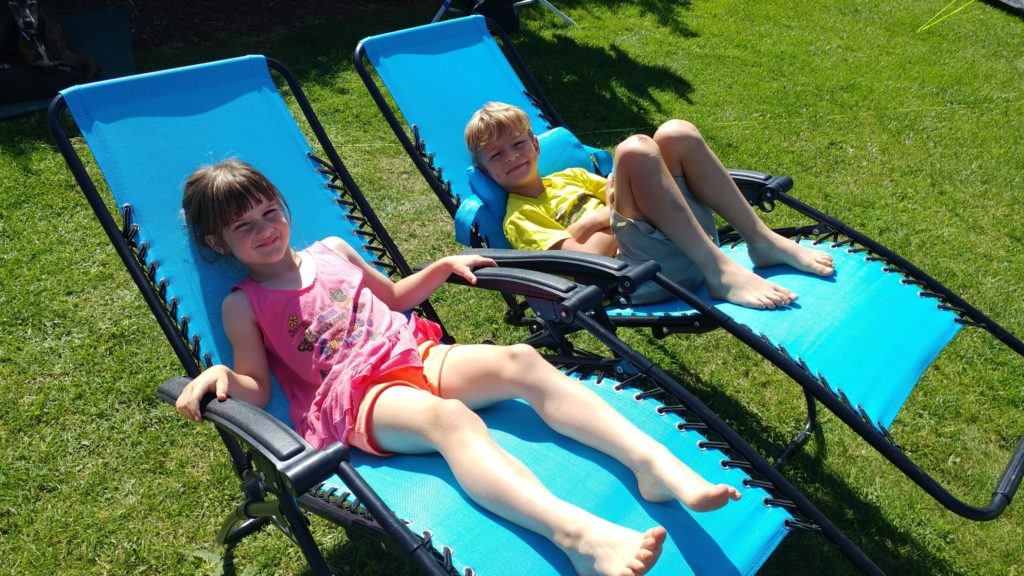 Why push to the limits?

Why not? We get asked this question a lot. Not just with regards to crazy challenges, but life in general. Why allow your child to throw herself down a 15 ft drop in the woods? Why take your 6-year-old around the black runs?

The answer is actually pretty simple. Dad didn’t read the parenting book quite right. The bit that said “Keep your child safe”, Dad interpreted as “Catch them as they fall”, rather than stopping them from doing it in the first place. So Dad has always seen his role as one of enablement. The net result is, that sometimes these get kids to do things that other parents might not dream of. It’s not right or wrong, but I’d rather allow them to do things safely, with Dads backing, than stopping them because they are not old enough, or not tall enough, or they don’t meet minimum government specification to do that. Age doesn’t need to be the limiting factor – in my opinion, attitude, ability and the right support count for much more.

Who cares about the detail – Lets Ride!

The reason for writing this follow-up blog is simple. Kids all over the country are doing tougher and tougher challenges, and we love reading about it. But, if you want to take on a similar challenge with your own kids, make sure you think it through. Plan, plan and plan some more – it’s a lot more in depth than just rocking up to the local trail centre, and there’s always something you have missed. However, with the right amount of effort put into the planning as well as the riding itself, the impossible can suddenly be achievable.

That said, let’s see what Lewis & Lara come up with for next year. Even this Dad has his limits!

If you are planning your own adventure and would like any more detail about the Taff Trail Challenge, please click here to contact us and we’ll get right back to you. Likewise, if you want a platform to blog about your progress, we are more than happy to host it for you.

55 Miles At 5 Blog
Previous reading
Triathlon. It’s a bit like cycling in the rain….
Next reading
The Taff Trail #55@5 – The Big Day Arrives